Showcases some of the Northern BC Archives collections that are available online. 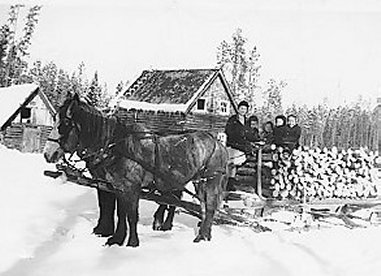 The story of British and European immigration to the Canadian West has been a major component of the history of the rural community in Canada. However few first person accounts exist of immigration to rural Central British Columbia, particularly from a woman’s perspective. This exhibit project brings one such account into the historical record through annotated excerpts of the manuscript, A Man’s Country written by Norah Banbery Doherty who, with her Irish immigrant husband Irwin Doherty, settled in Red Rock, B.C. from 1938 to 1960. Mrs. Doherty’s memoir inspired an entire oral history research project conducted by UNBC students, the results of which are also highlighted through this virtual exhibit.

With the support of the Department of Canadian Heritage Young Canada Works in Heritage Institutions, Northern BC Archives has completed the UNBC Office of Communications Photo Identification & Processing Project. Over 18,000 images from the holdings were reviewed to select the most historically significant images for this online exhibit. These images document the university’s inception as the grass-roots Interior University Society (1989), its creation under the legislated UNBC Act (1990), the inauguration of its first Chancellor & President (1992), construction phases of the Prince George campus (1990-1994), the official opening by Her Majesty Queen Elizabeth II (August 1994) and selected UNBC convocations, students, programs, faculties, and campus activities from 1994-2002.