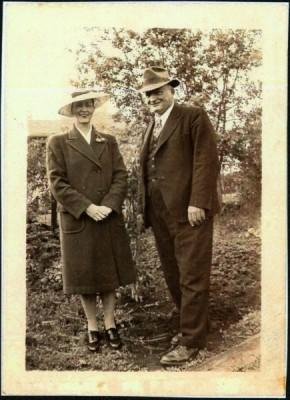 Knox Freeman McCusker (1890-1955) was a guide and surveyor in Northern BC. In 1909 he joined the staff of the Topographical Surveys Branch in the Federal Department of the Interior; in 1914 he was granted the commission of Dominion Land Surveyor. His work with the Topographical Surveys Branch included initial meridian, baseline and subdivision surveys and exploratory mapping. After being laid off in 1930 as a result of the Great Depression, Mac took up guiding in British Columbia’s Peace River region including the Liard and Dease River areas and up into the Yukon. One of his most famous guiding commissions was with the Henry Expeditions.

Due to his specialized topographical knowledge of the area, McCusker was involved with many aspects of the Alaska Highway Construction project: including the coordination of fuel and supply movement into Fort Nelson during the winter of 1941-42; advising on the layout of the highway route; organizing pack outfit support during construction, and supervising the building of construction camps. This knowledge ultimately contributed greatly towards the location and construction of the Northwest Staging air route and the Alaska Highway - both wartime projects of high international priority. In acknowledgement for his wartime efforts, he received the Certificate of Merit from the United States Public Roads Administration.

Collection consists primarily of photocopies of publications written by Mary Henry (1931-1935); annual reports; articles and papers written about Knox McCusker (1935-1997) as well as research materials pertaining to his life; articles and speeches written by Knox McCusker and general correspondence regarding surveying. Also includes original correspondence between McCusker and G.G. Aitken (1934-1938); photographs (ca. 1930-1950); McCusker’s 1909 certificate enabling him to be an Articled Pupil with the Dominion Land Surveyors; and an interview with McCusker conducted by J. Frank Willis (CBC, 1954).