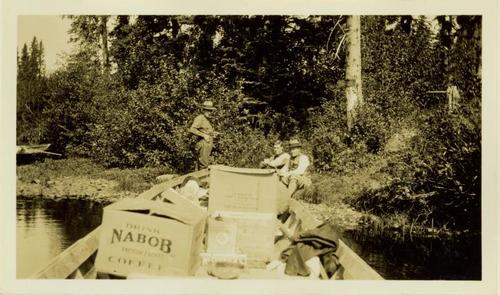 On August 19, 1927 a group of 13 “Liberal” minded men, including the Hon. Dr. James Horace King, Minister of Soldiers’ Civil Re-establishment & Minister of Health (1926-28), H.G.T. Perry, Provincial MLA for Fort George, along with civil engineer Sydney Junkins, who had completed a deep sea pier in Vancouver for the Canadian Pacific Railway, embarked on a boat journey up the Parsnip and Peace Rivers to reach constituents in the Peace River District. The trek had started in Vancouver, B.C., had proceeded by train to Ashcroft and motor car to Summit Lake, north of Prince George. At Summit Lake, they loaded their supplies and embarked on their rustic boat trip, proceeding along the Parsnip River to Finlay Forks, and then down the Peace River to Hudson Hope, just past Fort St. John. During this riparian adventure, they portaged, poled off of shallow river beds, traversed over rapids and camped under the stars. On its conclusion on August 31, the campaigners continued by motor car to the Peace River, and then by train to Edmonton. It is speculated that the expedition was undertaken because of Perry’s interest in extending the Pacific Great Eastern to Prince George and into the Peace River. 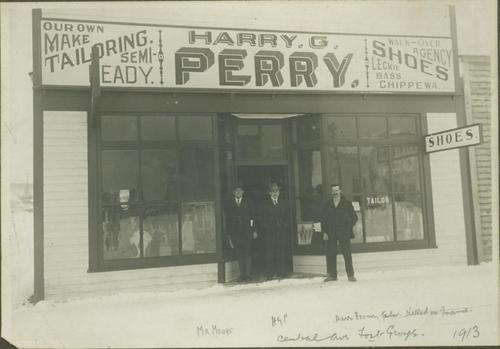 Harry George Thomas Perry (1889-1959) of Whitwick, Leicestershire, England arrived in Prince George in 1912, quickly becoming a successful businessman; he established Perry’s Shoe Store, a real estate and insurance business, and was owner and editor of several regional newspapers, including the Fort George Tribune, the Prince George Citizen and the Prince Rupert Daily News. Perry also participated in civic life in Prince George; he was elected as School Trustee, was director for the Prince George Theatre Ltd., served as Chairman of the Joint Committee for the Incorporation of Prince George and was President of the Board of Trade, before becoming Mayor of Prince George (1917-1918; 1920). Perry founded the local faction of the Liberal Party, serving as its first President of the Fort George District & PG Local Liberal Associations (1912-1959). After eight years contributing to the economic, artistic and political infrastructure of Northern BC, H.G.T. Perry (a.k.a. the “golden tongue orator”) pursued a long and successful career in Provincial Politics, including positions as Speaker of the BC Legislature (Fort George, 1920-1928; 1933-1945), Provincial Minister of Education (1941-1945), and Chairman of the BC government’s Post-War Rehabilitation Council, established in 1942, the first Council of its kind in Canada. Businessman, Politician, Advocate, Artistic Director and Orator – H.G.T. Perry was a man of many talents!