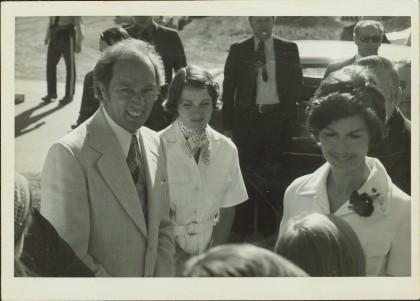 The Northern BC Archives has over 64 linear metres of textual records and other materials related to political personalities, social and political activists, and political history at various levels of government in Northern BC. Politicians include:

Other political figures in this guide include social and political activists:

Finally, the businessman and government lobbyist Adam Zimmerman who was heavily involved in the softwood lumber dispute and lobbied the government on the Canada/U.S. Free Trade issues.

All of these collections could be utilized in various research projects including but not limited to:

Image: 2009.6.1.81 - Pierre Trudeau, Margaret Trudeau, and Iona Campagnolo smile at a group in front of them