Using an image from the archives?

A credit line must be given for the publication, exhibition, presentation, or use of reproductions from the NBCA. Credit line to be written in the manner as follows:

Consists of copies of lot plans, a blueprint of the townsite of Port Essington, and an article on Port Essington from the 15 November 1984 edition of the Prince Rupert Daily News. 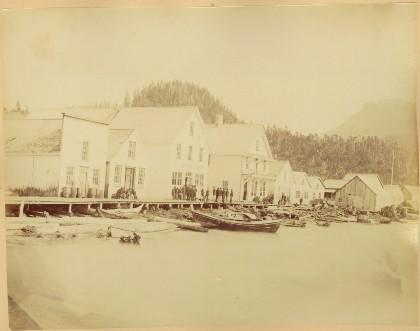 Contains photographs generally depicting landscapes, water scenes, and views of towns on British Columbia's north coast. Includes images featuring sternwheelers and other boats, canneries, fisheries, and individuals. Locations depicted include Port Essington and Port Simpson (Lax Kw’alaams) in BC, Fort Wrangell in Alaska, and other unknown towns. Includes one photograph of a man named Max Lohbrunner, and many other images depicting unidentified individuals.