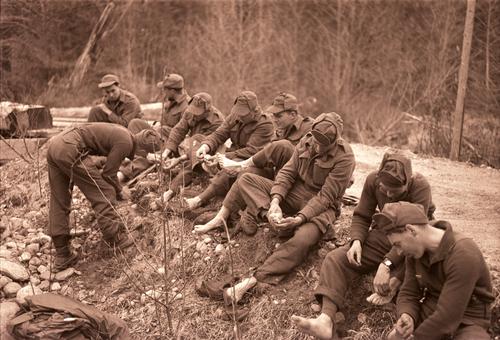 Content: These photographs were taken by an unknown photographer from Department of National Deference Public Relations (Pacific Command) during the 1945 Polar Bear Exercise. This exercise was held in northern British Columbia in February and March 1945, using some 1,150 soldiers of the 6th Division. The intent of the exercise was to test the effects of "wet cold" conditions on military men and material. The scenario for the Polar Bear Exercise was that: "Action will be based on reports of a Japanese force having been landed at Bella Coola from submarines, having rendered useless RCAF installations at Bella Bella, and giving positive indication that this force is composed in great part of construction personnel with a comparatively small protective element; the assumption being that it will try to construct a useable road from Bella Coola to permit movement inland of a larger fighting force to follow at some later date". The exercise itself was conducted in three overlapping phases. Between 12 February and 5 March the force moved from Prince George to Anahim Lake, chiefly using an array of motor transport but with some pack horses. The second phase ran from 4 March to early April. This was a series of marches from Anahim Lake to Bella Coola and return; a secondary force of 19 men split off from the main body and, travelling by snowmobile and snowshoe, traversed the Rainbow Mountains to Bella Coola; on the return march this detachment was increased to 120 men and dubbed "Y" Force. The third phase was removal of all troops by vehicle from Anahim Lake to Williams Lake. These photographs are believed to document the return from Bella Coola.

Japanese-Internment Oral History Project collection (2010.7) contains two tapes of interviews by Kent Sedgwick and Megan Heitrich, and one tape by Megan Heitrich alone. Interviews focus primarily upon the Japanese Internment during WWII in the Prince George – Valemount corridor. The interviews are with women who lived near an internment camp during the war, and had some contact with the Japanese men.

The interviewees were selected for having mentioned the Japanese internment in prior interviews: Louisa Mueller and Ruth Cunningham in interviews by the Prince George Oral History Group, and Karlleen Robinson in “A History of Logs and Lumber.” In the Cunningham Interview, Ruth’s daughter Lillian Coulling is also present.

Series documents H.G.T. Perry's political activities primarily in British Columbia. They include his tenure as Mayor of Prince George (1917-1918; and 1920); as Member of the Legislative Assembly for Fort George (1920-1928 & 1933-1945); as Speaker (1933-1937)and Deputy Speaker (1924 to 1928) of the Legislative Assembly; as Minister of Education (1941- 45); and as Chairman of the Post-War Rehabilitation Council (1942-194?). This series is comprised of significant materials covering a wide range of topics related to Northern British Columbia (such as Northern BC political and economic developments); World War II and Post-War Rehabilitation and politics in British Columbia.