Oral Histories of Northern BC

This outlines the oral history collections at the Northern BC Archives.

The objective of this project was twofold: to use Norah Doherty's manuscript as an interactive case study to illustrate the use of primary source materials in the study of history and to add to the historical record of this local community. It is planned that the research compiled be utilized in the teaching of local history and women's studies methodology courses at UNBC. (See a similar project using 18th century diaries to teach local history. Midwifery is explored using one woman's diary accounts as a mid-wife in 18th century Maine http://dohistory.org/martha/index.html). The research compiled here also provides the beginning of a history of the community of Red Rock itself and, we hope, inspire other communities to write their own histories.

The project was coordinated by Ramona Rose with the consultation of Dr. Mary Ellen Kelm of the UNBC History Department and Dr. Suzanne LeBlanc of  the UNBC Women's Studies Department. The project provided work experience for UNBC students to conduct research on the history of Red Rock and to build the website exhibit itself. We are grateful for the support and enthusiasm of the following UNBC students: Elaine Hauck, Jeremy Siddall, Alex Vlaszaty, Lele Zhou and Mark Sarrazin.

The story of British and European immigration to the Canadian West has been a major component of the history of the rural community in Canada. However few first person accounts exist of immigration to rural Central British Columbia, particularly from a woman's perspective. This website project brings one such account into the historical record and provides annotated excerpts of the manuscript, "A Man's Country" written by Norah Banbery Doherty who, with her Irish immigrant husband Irwin Doherty, settled in Red Rock B.C. from 1938 to 1960.

The history of Northern British Columbia is still for the most part unwritten and unrecorded and resides in the living memory of its people. Norah Doherty's memoir of their efforts to home-stead on 160 acres in Red Rock, south of Prince George, providedthe catalyst for further enquiry into the mid-20th century history of this community. The Red Rock Community History Project was conducted by a team of UNBC students and coordinated by the Northern BC Archives at the University of Northern British Columbia. In our efforts to preserve a community's "collective memory" we conducted twelve oral history interviews with long-time Red Rock area residents to record their memories of life during this time period and collected over 200 photographic images from them, many of which are found on this website.

This research project is a component of Living Landscapes: Upper Fraser Basin: Past, Present and Future, an initiative of the Royal BC Museum in Victoria, BC. All archival materials found on this website are available for public research at the Northern BC Archives at UNBC.

These webpages are dedicated to those individuals and families who homesteaded in the Red Rock area and recalls their efforts to make a living "off the land" along the Fort George Canyon. 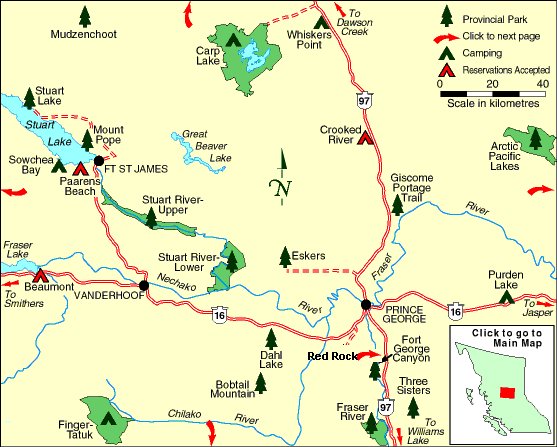 The history of European resettlement in the early 20th century along the Upper Fraser River in the Fort George Canyon area has received little attention from academic historians.

This is particularly true of the community of Red Rock. Situated about 28 kilometres south of Prince George near the Fort George Canyon (see map), the land is part of the traditional territory of the Lheidli T'enneh Nation and continues to be used by First Nations Peoples for fishing and hunting.

The community of Red Rock received its name from the reddish color of the rock found in the Fort George Canyon. After the Barkerville Gold Rush of the 1860's some gold-seekers moved further north hoping to find gold along the Fraser River near Hixon. They set up small mining claims along the Fraser though no one found gold deposits as rich as those in the Cariboo goldfields.

With the construction of the Grand Trunk Pacific Railway to Fort George (c.1912-1914) and the building of small sawmill operations nearby along the Fraser River (c.1911-c.1920) settlers moved into the "boom town" of Prince George. Others preferred to homestead on the agricultural lands further south of Prince George in the communities of Red Rock and Stoner. Though the exact size of its population is unknown, it is estimated that 300-500& people lived in the area of Red Rock "Stoner" Cale Creek making a living through farming, trapping, logging and mining during the 1930s-1950s. After World War II many farming families moved to Prince George, by then a thriving town. In the early 1950s Red Rock experienced a small "boom" when people moved to the area to work on the building of the Pacific Great Eastern Railway line, many living in the railway bunkhouses near Red Rock.

Since the 1950s the Red Rock community has again experienced fluctuations in its population. In 1967 the BC Forest Service opened a forest research nursery at Red Rock, which operated until 2000. In 2001 Red Rock's only elementary school closed down and its students are now transported to the neighbouring community of Buckhorn, closer to Prince George. Indeed, for some, Red Rock may only be considered a "bedroom" community of Prince George on Highway 97 and many do not know of its rich past.

This website project is by no means a comprehensive history of the community. It is an attempt to collect and preserve the stories of some of Red Rock's community residents and to tell their story of homesteading on the lands along the Fort George Canyon.

In 1930 Norah Banbery left Wolverhampton, England, setting sail from Liverpool to Canada to follow what had become for her a perennial obsession since childhood - the desire to explore the Canadian West. Lured by the attractive posters from the Canadian Pacific Railway that displayed "long vistas of golden wheat (and) range lands... alive with grazing cattle." Norah, along with hundreds of other Europeans, set sail to find work and a new life in a new land.

In the 1930s and 1940s Norah wrote articles about farm life in Canada for the Wolverhampton newspaper, Express and Star, and later began her memoir about life in the Red Rock region. She died at the Jubilee Lodge, a senior's home in Prince George in 1991, at the age of 90 years.

Her memoir "A Man's Country" recalls her early years in Meota near North Battleford, Saskatchewan where she met her husband Irwin Doherty [alias Jim Martin in the manuscript], an Irish immigrant farmer. It follows the Doherty's moved to British Columbia to homestead on 160 acres of land in Red Rock, south of Prince George along the Fort George Canyon on the Fraser River.

Norah's account of life in Red Rock recalls experiences similar to that of other farmwomen in isolated Western Canadian communities in the Depression era. These were often days spent cleaning, cooking, and most significantly rationing, penny-pinching and finding ingenious ways to create a comfortable household in a log cabin. Yet Norah's account also provides a personal view oflife as a young woman in a new land. She talks about her longing for female companionship and also her attraction to the land and the people that she met. Her story provides a woman's perspective of "living of the land" in a time when many still considered the area to be, as Norah states, "A Man's Country".