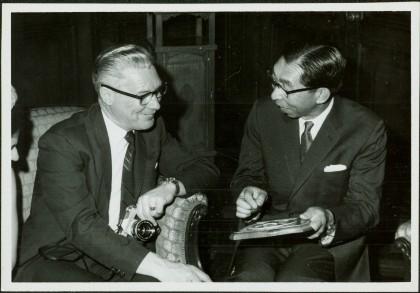 The following collections contain some content on Japanese people and history in Northern BC. To browse more of our collections of Japanese content, we suggest the following search strategy: japan OR japanese OR nippon OR tokyo. When formulating your search, consider the historical use of terms used to identify people of the cultural group you are researching. Some of those terms may be considered derogatory today, yet still exist in original archival primary sources. Adding historical terms to your search may unearth additional sources. Add in other qualifying words with Boolean Operators OR, AND, or NOT.

Japanese-Internment Oral History Project collection (2010.7) contains two tapes of interviews by Kent Sedgwick and Megan Heitrich, and one tape by Megan Heitrich alone. Interviews focus primarily upon the Japanese Internment during WWII in the Prince George – Valemount corridor. The interviews are with women who lived near an internment camp during the war, and had some contact with the Japanese men.

The interviewees were selected for having mentioned the Japanese internment in prior interviews: Louisa Mueller and Ruth Cunningham in interviews by the Prince George Oral History Group, and Karlleen Robinson in “A History of Logs and Lumber.” In the Cunningham Interview, Ruth’s daughter Lillian Coulling is also present.

Some participants talk about the ethnic demographics of the Upper Fraser and some mention either Japanese people in the region or specific individuals from Japan with whom they were friends or acquaintances. Some also describe the Japanese Interment Camp.

One interview was given by Ken Sasaki (2017.6.1.60 and 2017.6.2.60), of Japanese heritage, whose father was in the interment camp at Giscome. He talks of his and his family's history and experiences here in Northern BC.

The Adam Zimmerman fonds (2003.8) consits of the administrative and business papers of Mr. Adam Zimmerman during his tenure as a senior level executive with Noranda Inc., Noranda Mines Ltd, and Macmillan Bloedel Ltd., particularly in Ontario, Quebec, and British Columbia with the majority of these records relating to the senior level operations of these companies.

These records include documents depicting the business relationship between Adam Zimmerman's companies and Japanese paper companies. They include documents from joint meettings between the Canadian Pulp & Paper Association and the Japan Paper Association as well as business relationships with Japanese organizations including the Yuen Foong Yu Group and documents from several Canada-Japan Businessmen's Conferences.

Restrictions on access: Some restrictions apply. Files may need to be reviewed by an archivist before public viewing.