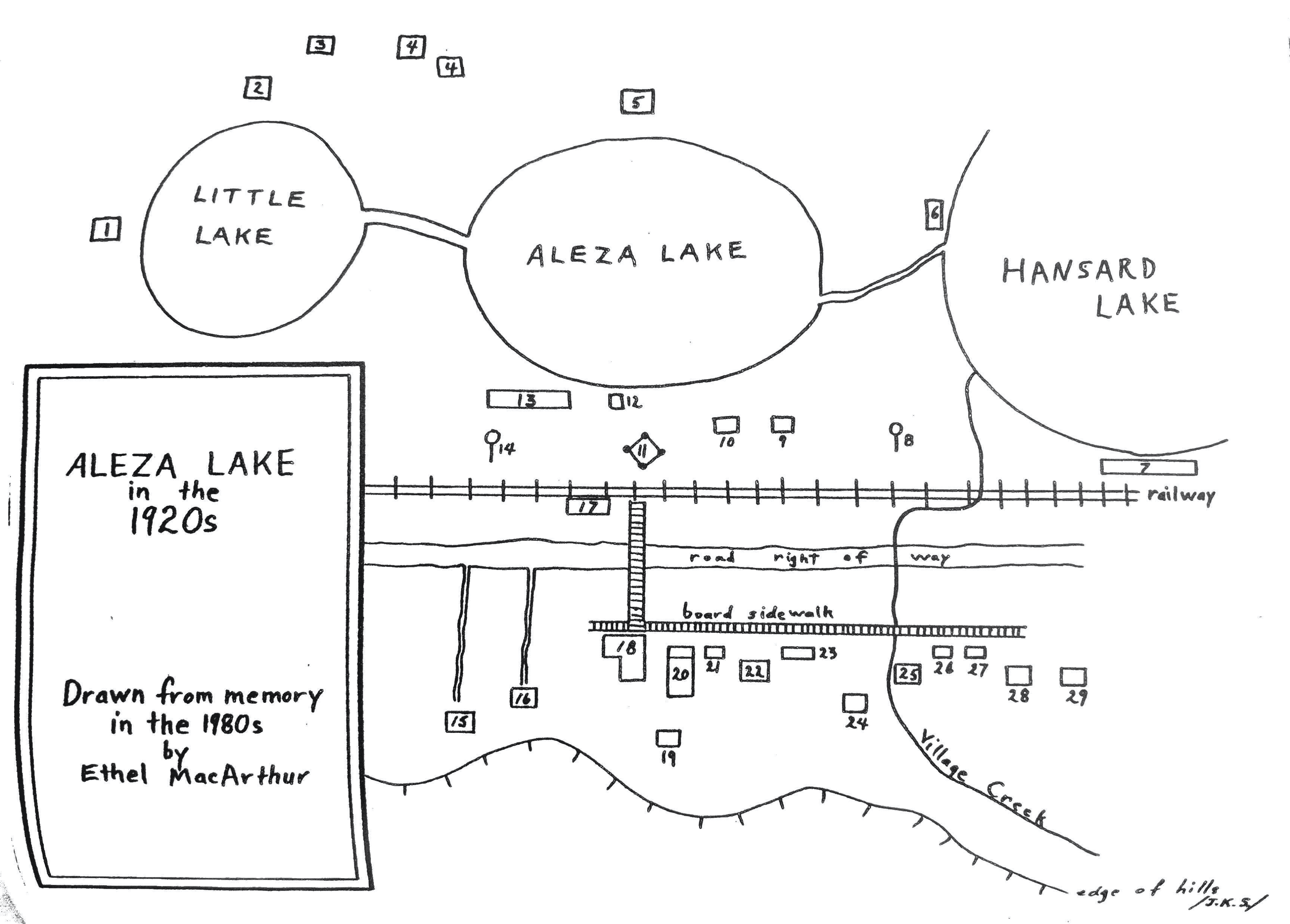 The community at Aleza Lake existed prior to the development of the Aleza Lake Experiment Station though precise dates are unknown. People began to settle in that area in the early 1900s in anticipation of the Grand Trunk Railway that would be extended between McBride and Prince George in the year 1913 (referred to as the East Line). Its location in the heart of the British Columbia wilderness made Aleza Lake a popular home base for those looking to make their name in forestry.

Aleza Lake is one of three lakes found alongside what is now known as the Upper Fraser Road: Hotchkiss Lake, Aleza Lake, and Hansard Lake. These lakes were connected by little creeks, and the community of Aleza Lake stretched along the roadside so that it accessed all three of these bodies of water.

The Dakelh, or Carrier, people of the area called the lake Tatsibun, meaning "waves lake." The name Aleza was given to the lake and community in 1913 for Grand Trunk Pacific Railway station, named after a Carrier woman who lived and often fished there.

Ethelwynne MacArthur grew up at Aleza lake and recollects her life there through an oral history interview and her memoir, The way it was: A history of Aleza Lake (1983). She recalls Mr. Lorne Lyle who moved to Aleza Lake in 1917 and opened up a general store. Mr. Lyle coached many of the Aleza Lake sports teams, including hockey, softball, and baseball. Lyle also held a position as the postmaster, earning enough money and reputation to help fund the building of a cemetery, a school, and a skating rink.

Newspapers record the presence of several growing organizations and groups in Aleza Lake, such as the Red Cross society, Boy Scouts, sports teams, knitting clubs, and after school groups. Many used the lakes for recreation; many people used rowboats, fished and hunted game, went swimming, and had picnics near the water. Travel from Aleza Lake to Prince George was essential to enjoy the amenities of the larger city. After roads were rebuilt in the 1930s to allow wagons and cars to use them, travel became even more popular and residents of Aleza Lake began to rely more heavily on Prince George for things like hospitals, police, and major social events.

Many of the residents of the community spent their time working as loggers, millwrights, researchers, and business owners. Those who did not own businesses often owned land. The many homesteaders who farmed the area often provided teaching, boarding, cooking, and care-taking. The school at Aleza lake only went up to grade eight with the closest secondary school located in Prince George. A few of the men who worked at the Aleza Lake Experiment Station lived with their families in the community of Aleza Lake, though the majority of them lived on-site at the experiment station.

A job in forestry could pay anywhere from .45 to .75 cents a day, depending on one’s job, and encouraged many to move to Aleza Lake. MacArthur remembers the Northland Spruce Lumber Company as one of the most successful in the immediate area, though there were several other mills opening and closing up and down the East Line. When the Northland Spruce Mill closed in 1927, it caused problems for those whose livelihood were connected to the harvesting of local trees. David Mills, who conducted research on the socio-economic history of Aleza Lake in 2007, states that there were actually quite a few failed mills in the surrounding area, and that, “while the East line could be profitable and was still minimally regulated, many investors lost money or went out of business as a result of inexperience in the Northern B.C. logging/milling environment” (Mills, 2007, 18).

Trappers, traveling through the community selling furs, as well as homesteaders and entrepreneurs, who kept their businesses going through the 1930s, helped Aleza Lake survive the Great Depression that turned many other small communities into ghost towns. New roads were built to connect Aleza Lake to the main highway in the 1930s. Prior to this, trains were one of the only means of transportation in and out of the community.

When the Aleza Lake Experiment Station became used as a Young Men’s Forestry Training Program site during the Great Depression, many of the people situated there stayed on-site and did not have much contact with the town of Aleza Lake.

Today, major industry has shifted its focus into larger hubs, such as Prince George, and the smaller communities of Aleza Lake, Giscome, and Willow River have all amalgamated into one large rural community on the outskirts of Prince George. There are still a few residents out at Aleza Lake, and many people who remember living there before people started leaving to move into larger cities.