The early 1900s saw a time of rapid development for Canada’s forest industry. The Grand Trunk Pacific Railway made tracks through Prince George in 1913, creating easy access to BC’s interior. The East Line brought traffic through the Upper Fraser area, which was one of the reasons the Aleza Lake Experiment Station site was built where it was. The site was accessible and provided a space that could eventually be reached by the main highway via new roads.

Through the late 1910s, the British Columbia Forest Service (BCFS) implemented a focus on two principal forest regions: the Spruce-Balsam forests of the Central Interior and the Douglas Fir woodlands of the southern coast. In 1913, Bob St. Clair, a member of the BCFS, recommended the creation of two experiment stations at Aleza Lake and Cowichan Lake. Finished by the end of the 1920s, these two experiment stations, though built with the same idea in mind, would interact very little over the course of the next few decades.

The Aleza Lake Experiment Station (ALES) was built first, completed near the beginning of 1924, under the supervision of Percy Barr, a recent graduate of the forest engineer program at UBC. Barr recruited the help of several individuals to outline the site, build the necessary housings, and begin experimental trials in the forest surrounding the Aleza Lake Experiment Station. He used the Experiment Station as a home base for his own research, studying the plants and wildlife in hopes of finding ways to help the forest grow back healthily after it was logged. Using the information he gathered, Barr spearheaded the research done to maintain B.C. forests long-term.

By logging in such a way to ensure they did not run out of trees every year and learning the best methods to help trees grow back after harvest, Barr and his crew looked to develop a methodology called “sustainable yield forestry.” Barr welcomed sixteen other men into his crew in 1925 to assist in his research. These efforts would continue until the Great Depression in the early 1930s, which would hinder the economic abilities of many businesses, including the ALES. Trials that had already begun could still be monitored over time, but no new trials would be started for many years. Several of the employees at the ALES also moved on in the early 1930s, and by 1934, the Experiment station was boarded up.

The ALES site, however, was still used after World War II, as research foresters and surveyors used the station as a base for their operations throughout the 1940s. In 1949, resident forester Larry de Grace was hired to reactivate the ALES as a research site, bringing with him several researchers studying variety of topics, such as forest nursery and regeneration, harvesting methods, and scarification (Schmidt, 13). As funding for research depleted, however, the B. C. Forest Service was forced to shut down the ALES on December 11th, 1963. On this day, any buildings that could not be relocated elsewhere were burned down to reduce the cost of maintaining them, and a legacy of research history was lost. Few artifacts and records survived and it is rumoured that many of them were only saved by employees who were hoping to keep the memory of the ALES alive. The main station was left abandoned and the only people who interacted with the site were dedicated forest researchers who periodically checked in on the trials that had been conducted in the research forest out of personal interest. 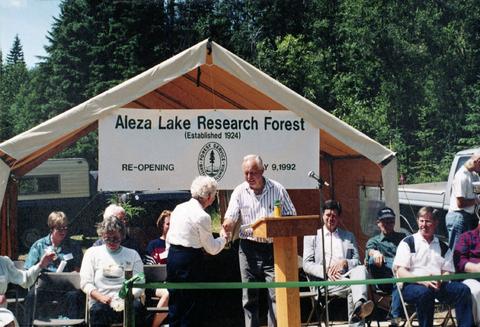 New hope was found in 1992, however, when the funding was found for the site to re-open as the Aleza Lake Research Forest. In conjunction with the University of British Columbia and the University of Northern British Columbia, the Aleza Lake Research Forest Society (ALRFS) was created to continue to maintain the forest itself and the research that had been conducted in the area for nearly a century. Today, the society is taking a vested effort in looking at the historical and scientific properties of the legacy created with the establishment of the ALES and what the future might hold for the ALRFS.